Last weekend we were very privileged to be invited to the launch party of the latest kids comic to hit the news-stands, The Phoenix, at The Story Museum in Oxford.

It was an exciting day, not only was it the launch party but Issue one was due any moment and there was an eight-page oull-out in The Times to be had. Luckily for us, just minutes before we were to leave the postman arrived with Issue one, which was duly read in the car on the way.

We had a really lovely time in Oxford. It was great to meet many of the amazing writers, illustrators, creatives and Phoenix staff involved in the comic. Niamh had enormous fun gathering as many autographs as she could, and the delicious selection of cakes added to the delight of the afternoon – thank you so much for the invite! 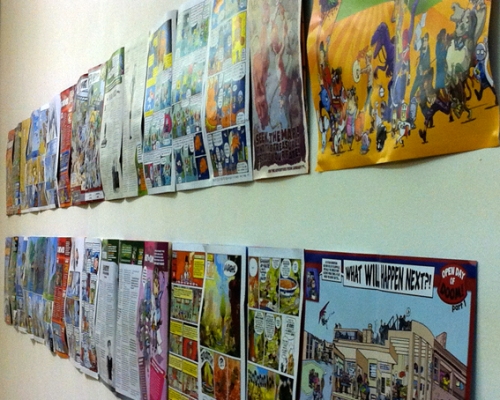 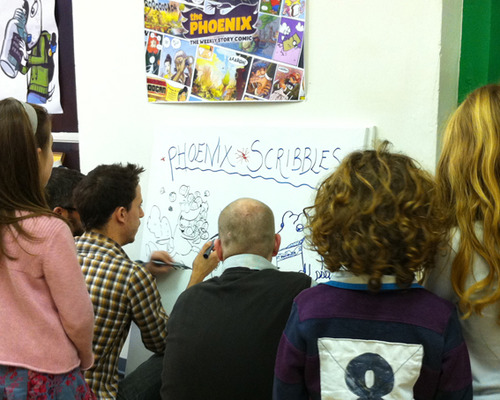 The children really do like the The Phoenix, it is full of potential (and fabulous stories) and we wish it every success for the future.

You can read more about The Phoenix launch party here.

It’s all very well us ‘oldies’ wanting a return to the traditional comics of our childhoods… BBB has been busy over the past couple of months asking children for their views on comics and magazines. We have an enormous pile of questionnaires to get through and we hope to publish the childrens’ thoughts in the coming weeks.

A couple of weeks ago the excitement levels in our house hit the roof as an envelope containing Issue Zero of The Phoenix arrived through the letterbox.

As my six-year-old lad was drawn away by the powers of Lego, my daughter settled down to read the comic from cover to cover. Here is her review.

My first impressions.
It has a nice front cover, good title, and it would probably stand out in a shop. It’s obviously for kids and makes me want to find out more.

The comic.
In the Welcome page, I really liked the names of the characters on The Phoenix team and the ‘Phoenix fact’.
The first story is ‘The Pirates of Pangaea’, beginning with a map that I really liked. I enjoyed the way the characters speak with their ‘pirate talk’.
‘What will Happen Next’ (a puzzle page) – it looked strange at first, but once I looked online at Part 1 I loved looking for all the things that happened.
‘Tale Feathers’ (featuring an extract from a new book) – I loved this too, I really want to read the book now.
‘Star Cat’ – Quite good, funny and sci-fi.
‘How to Make Awesome Comics’ – I really liked this, good advice! I want to draw my own now. (Niamh filled this in straight away.)
‘The Apprentice’ – I like this story, the setting and the illustrations.
‘Corpse talk ‘– it was very funny and full of facts.
‘Bunny vs Monkey’ – quite good. I like the way it was set in the Jungle with talking animals. Funny too.
I also like the look of some of the stories that are advertised in this issue that will begin in Issue 1. In general.
Nice illustrations. I really like the notes from the editors, Tabs and Chops, throughout the comic and I’m looking forward to reading the stories. Can’t wait for Issue 1!

Niamh did love it, and has since re-read it a number of times. It now lives at the bottom of her bed along with her copies of The Dandy, Mo-Bot High and various other comics and books – she reads a lot!

From a parents point of view, The Phoenix looks really promising and the artwork is wonderful. It’s great to see a comic for children full of stories and I wish it every success.

The Phoenix Comic is almost here!

If you are looking for a new children’s weekly comic full of original and exciting stories this could be the comic for you. It’s launching in January, but if you’d like to see a preview, a limited edition ‘Issue Zero’ is available through this weeks “Waitrose Weekend” magazine – look for the promotional code.

We can’t wait to see our copies – and we hope it all goes well for The Phoenix!

Great news! I am very pleased to find that I am not alone in lamenting the lack of comics for girls in the mainstream.

My limited research has taken me to new places and I have discovered the joys of online forums (I’m new to those too!). John Freeman of the Down the Tubes website has very kindly furthered my cause by promoting “Bring back Bunty” on the Down the Tubes forum, which has gained some interest and very helpful comments – thanks for all those links guys, and thank you John! I’ve heard from several sources that many KS2 girls are into Manga. Kev F Sutherland, a comic artist working in schools, says “based on the schools I visit … more girls read Manga than boys, and the content seems to be what attracts them. And if they don’t actually read the manga comic books, they all – and that’s 99% all – draw in a manga style. So, under the surface or running alongside things, manga art and comic-strip storytelling, is part of their cultural life.” I have seen this first hand in my daughters’ school, the older girls do indeed draw in a Manga style, but I had never questioned it before… Are the girls interested in Manga because of a lack of original British comics in the mainstream? Kate Brown, comicker and illustrator, said there was a lack of choice when she was younger, until she found Manga; “One thing I loved about the Japanese comics, was that I did not feel like they had been committee-built, market-sourced, “made to order” works. They felt like they had been made by people who had the same interests as me.” As the kids are still interested in comics, it looks like they are finding alternatives to mainstream … Kate Brown suggests, “Publishers generally can’t take risks on much, let alone comics, of which there is a traditionally low readership amongst UK citizens. It would go doubly, I’d imagine, for something that would be perceived as a super-niche market… in a way, because it doesn’t exist already (or exists minimally), it becomes this kind of odd self-fulfilling prophecy! There are none because there are none… because there are none.” I tend to agree with the self-fulfilling prophecy, especially when you look at what is available in newsagents for children – a collection of identical, brand led, marketing tools lacking in substance. A couple of the comic creatives I’ve been in contact with have mentioned the DFC, I had no idea it existed and I’m very sorry to have missed it. The DFC sounds like something we would have definitely been interested in. I hear it’s coming back as The Phoenix next January, which sounds exciting – I shall be watching and waiting. I’m quoting Kate Brown again “The bottom line is that kids love comics. Everyone loves comics. It’s just matter of convincing people”. Thanks Kate, I’ll try! I long for the choice of original British comics that I had when I was a child growing up in the 70’s and 80s. Hopefully if we can spread the word, my cause may gain some momentum and get publishers interested once again Fingers crossed!